In January 2019, a new international airport named Timna named after Ilan and Asaf Ramon appeared in Israel. It is also called Ramon International Airport. The open ceremony was solemn. Benjamin Netanyahu, the Israeli prime minister visited the event accompanied by a group of high administration representatives including Minister of Transportation and Intelligence Israel Katz, the head of airport administration Yaakov Ganot and the major of the Eilat city Meir Yitzhak Halevi.

This high level of attention can easily be explained. This is the first airport, which was built in Israel after they became independent. The first airport in the past 70 years. The new airport is designed to receive both inner and international flights. It is able to receive all types of planes. The airport will substitute two old ones – Ovda and Eilat, which received tourists, who came to vacations at the Read Sea.

Ramon is also considered to be the auxiliary airport for the main Israel airport Ben Gurion, located in Tel-a-Viv.

Relatives and close friends of Ilan and Asaf Ramon, the first Israeli astronaut and his son, pilot of Israeli AirForce were the guests of honor during the opening ceremony. The airport is named to honor father and son.

This new Ramon airport is close to Eilat city. It is located 19 kilometers from the city in Timna Park. It will take about 10-15 minutes to get to the airport.

There are four ways to reach this air harbor:

There is parking on the territory of the airport. Visitors can park their cars at the airport for free to meet or to see off passengers. However, if they stay there for more time, they will have to pay for each minute of stay according to a local tariff.

Those who came to the airport by their own cars and want to leave vehicles there have the opportunity to use the parking with rather competitive prices. The safety of cars is provided by the administration and employees of the airport. This parking offers a daily rate.

There are plans to build a railway station here to receive trains from Eilat and Tel-a-Viv and to launch a high-speed tram. 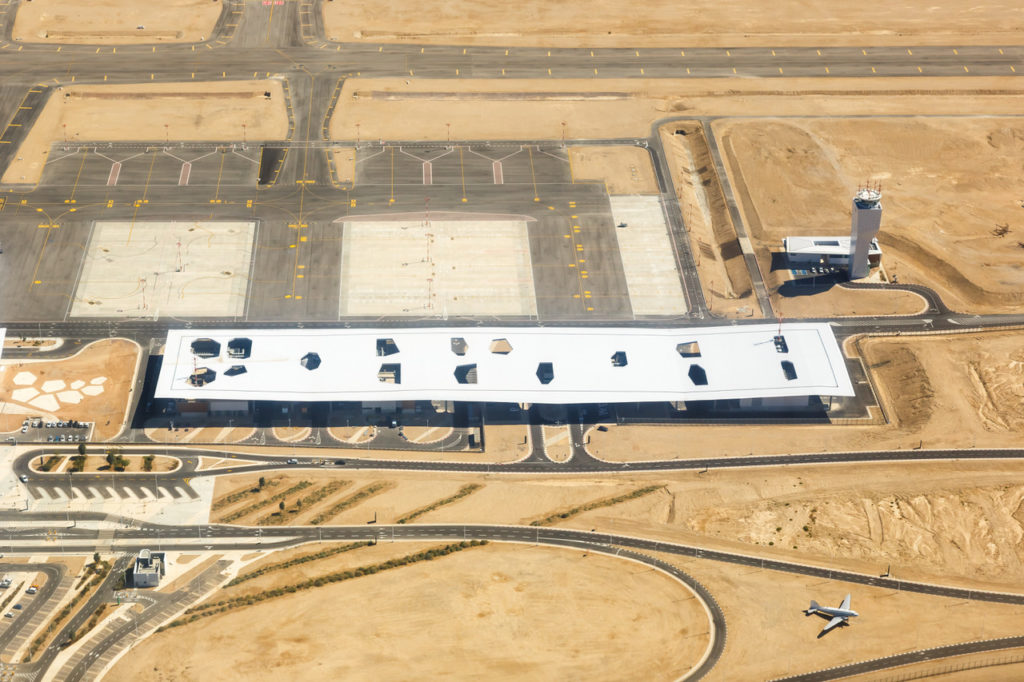 Ramon International Airport has one spacy terminal. Its capacity is 2 million passengers per year. It was designed by local designers and has items made in aluminum and bamboo. There is also a decorative swimming pool in the central point of the terminal. There are also dutyfree shops there, which are opened for all the passengers including those who travel inside Israel.

A new 50 meters height control tower and a runway were built. According to the initial project, the length of this runway should be 3100 meters. However, in 2014 after Operation Protective Edge was done, the length of the runway was increased to 3600 meters to receive all types of planes.

Ramon International Airport has its own plane parking, which can receive 29 aircraft simultaneously. A high wall was build to protect the airport as it is located close to the Jordan boundary.

Ramon International Airport was designed to receive passengers from other Israel cities and some European states. Currently, the following airlines are presented there:

Who gave the name to the airport

Ramon International airport is named after Ilan Ramon and his son Asaf. Ilan is a legend of Israel. He was born in the family of former Auschwitz prisoners. He graduated from the flight school with distinction and participated in the Yom Kippur War. He was promoted to colonel and had more than 3 000 hours of flight practice when he was invited to participate in the NASA space program.

Ilan Ramon graduated from special training in the United States and became the first Israeli astronaut. His first and the last trip to space started in January 2003. However, he was not able to return back to Earth as there was an accident with Columbia shuttle and all the members have died.

Ilan Ramon gave his name to many objects in Israel and outside this country. The control tower at Ben Gurion airport is named after him as well as a street in Toronto and even craters on the Moon and Mars.

One of his sons (he had four children) decided to follow Ilan’s career and became the AirForce pilot. He had a dream to become an astronaut. However, he crashed in 2009 during a testing flight on F-16 fighter. He was 21 years old only.

All information about departures and arrivals as well as about additional services can be found at ramon.airportsworld.org